Established in 2011, Empire City Soccer Academy is a select soccer club created as a way to support and develop committed boys and girls soccer players from all over Eastern New York (primarily Saratoga, Warren, and Washington counties). We conduct tryouts each year for our U12-U19 teams and select teams based on these tryouts. We also have teams for younger ages that are not tryout based.

Our 8 month program for U12-U19 boys and girls teams runs from November - June. During this time teams will train twice a week and then play in 1-2 tournaments a month. We then have two, six week sessions for our 5-10 year olds.

​If you have questions please don't hesitate to contact us. 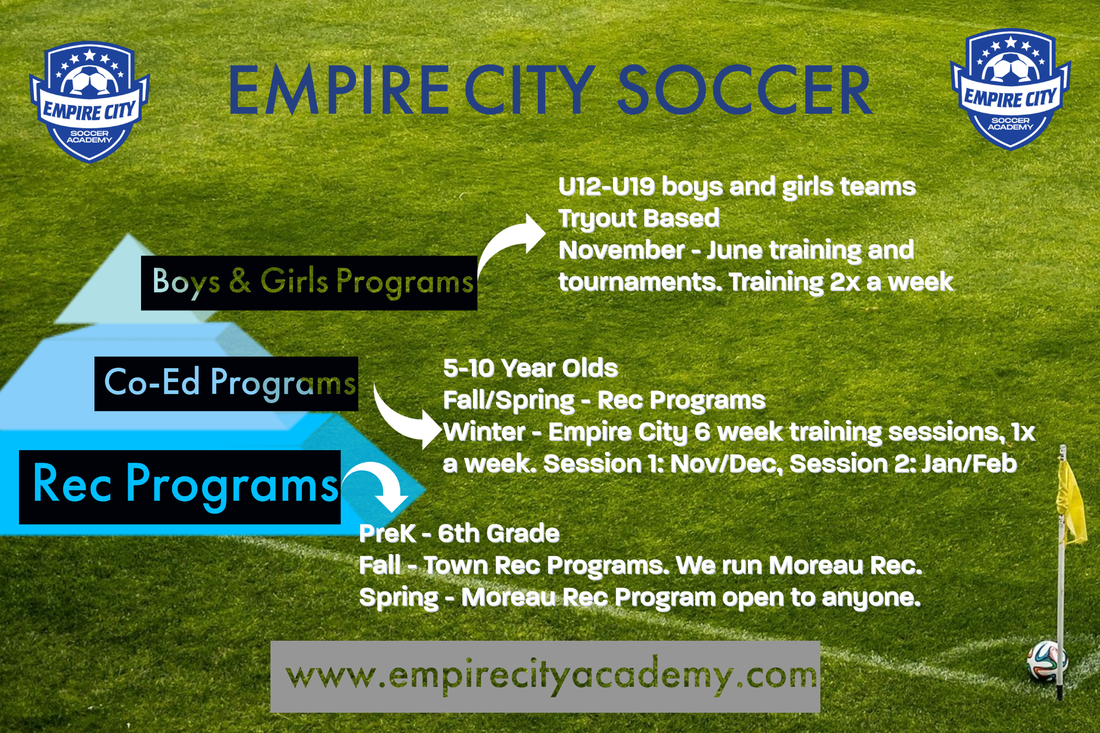 Club Philosophy:
Player development
Using fun and challenging games, we intend to teach the fundamental aspects of soccer to improve an individual’s technical and tactical skillset, all while encouraging creativity and self-expression. Gradually increasing speed and difficulty, we will reward bravery and risk-taking in order for players to build their confidence to compete at any level they desire.
Team Development
The focus for all of our teams is to apply each player’s skill and creativity into an environment where they have a complete understanding of their role, and the roles of everyone around them. Through small-sided games in practice, and in league games, our players will gain the confidence to work together as a group to play in any situation. Having a positive work ethic and accountability as a group, with the goal of having fun and winning, is what we are all about.
Character
Being competitive and pushing ourselves to win is very important; however, this will not be achieved at the expense of one’s character. Both the coaches and players will be held to a high standard of sportsmanship. Understanding the importance of one’s actions and the effect it has on the individual, their team, and their community is one of our highest priorities.
Community
Together we represent families, communities, and schools from various areas of Eastern New York. It has been one of the most positive experiences in our careers to be a part of organizations such as this. Our players, coaches, and parents look forward to every opportunity we have to give back and assist all of the surrounding communities.