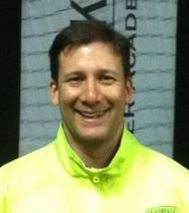 A native of Oneonta, New York, Coach Shaver has been with Empire City Soccer Academy since 2014, where he is the Boys U19 coach. He is currently the Varsity Head Coach for the Glens Falls boys soccer program, a position he has held since 2003. Prior to this, he had been a modified and junior varsity coach in the Glens Falls boys soccer program since 1999. During his time with the Indians, Coach Shaver led the boys soccer team to three sectional final appearances in 2006, 2007 and 2009 and one semi-final appearance in 2011. Mike was named the Section II Class A Coach of the Year in both 2005 and 2006, and in 2011, he was selected to receive the Capital Region Soccer Coaches Association "Golden Thread Award" for his contributions to the sport of soccer in Section II.

Coach Shaver holds a USSF "E" license, an NSCAA Level 5 Diploma and a Coerver Youth Diploma. Prior to joining the Empire City staff, Mike was on the Soccer Academy training staff at the Adirondack Sports Complex from 2008-2013. Coach Shaver joins Empire City following the merger with Adirondack FC where he trained U-15 and U-17 boys while also assisting with the U-10 and U-12 boys squads.